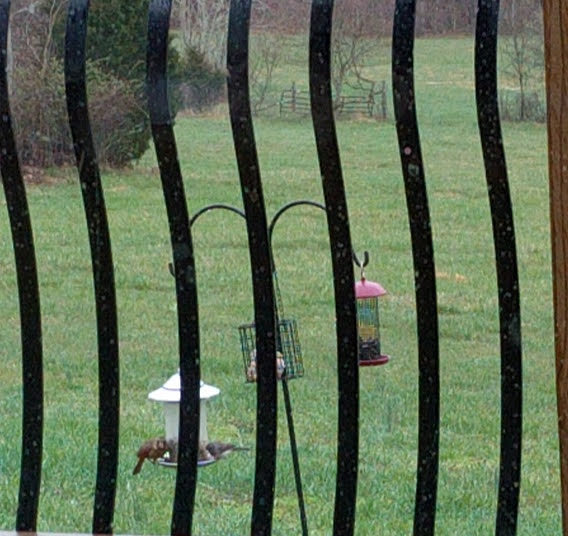 From fall into early summer, the feeding station is kept full of seed and suet to attract the native and migrating birds to the feeder. This has been a habit for more years than I can count. In the home that our kids mostly associate with as their growing up home, the yard had dozens of mature trees, so squirrels were often feeder raiders and I tried every trick to foil them. Feeder poles with baffles, greased poles, hanging feeders with top shields, nothing worked until… I had the idea to dangle a feeder about 15 feet from a large branch, high enough that I could mow under it, but still reach it to fill, and 10 to 12 feet away from the trunk of the tree. Squirrel proof, but how to accomplish it. By then, Son 1 was at least a young teen and already 6 feet tall, and a Scout so he had bear bag experience camping. I don’t remember what we used as a weight, but a weight was tied to a light rope and after several attempts, he lobbed that weight over the branch. If I recall, it wasn’t heavy enough to pull the rope and fall very far, but somehow we managed to pull it down, tied a vinyl coated clothes line cord to the rope and pulled it over. With his ingenuity and strength, I had a squirrel proof feeder. When asked how we got the rope there by visitors, a sly, “trained squirrel” comment was used more than once. Later as an adult, he built a terrific deck off the back french doors and many hours were spent in the shade watching the birds.

Once here in the mountains, I heard horror stories of feeders attracting bears, so I didn’t hang feeders for a few years, but finally broke down. There is a double shepherd’s crook pole in the back with two seed feeders and a suet feeder, and a single shepherd’s crook pole in the front for the hummingbird feeder from mid April til they leave in October. That one attracts ants and I haven’t been able to foil them.

I love sitting at the dining table or looking our the kitchen window at the birds that come to dine. The usual cast of characters include Chickadees, Tufted Titmice, Purple Finches, House Finches, Gold Finches, and in the winter, Juncos that hop around under the feeder for dropped seed. This spring for the first time there are three woodpeckers that come to the suet. I identified them based on what my Dad used to call them, but then when I looked in my bird book, I’m not so sure about that. He called the smaller one a Downy Woodpecker, but this bird is larger than the description and better fits the Hairy Woodpecker description, but the book says they are shy birds, so I’m not sure they would come to the feeder. The other he called a Flicker, but I think it is a female Red Bellied. The third is definitely a male Red Bellied. For the past few days there has been a dove and this morning for the first time, a female Cardinal. I guess we will have to start folding our car mirrors in when not in use or Mr. Cardinal will fight with himself.

At two corners of my garden are nesting boxes put there for the Eastern Bluebirds. The first year the boxes were there, we had a nest of baby Bluebirds, then the boxes were overtaken by the iridescent Tree Swallows who have occupied both boxes for the past few years. I was pleased to see that the Bluebirds have again staked out one of the boxes and the Swallows the other. I have a third box but the only available post that is already set is too close to the box the Bluebirds have chosen. I have a young peach tree that looked last year like it had died, though it has 4 blossoms on it this year. If it dies, perhaps I will strip the branches off and use the trunk as a post for the third nesting box for next year.

We have a very persistent pair of Barn Swallows that insist on building a nest against the logs on the top of the bathroom exhaust vent. I am as equally persistent in destroying their work before they lay eggs. We have a barn and they can build all the nests in and around it that they want, but I don’t want them on the house. Last year they sneaked around me and build a nest where the logs cross at the back of the garage, but the 6 foot blacksnake I later relocated after it found my coop, was heard and then seen trying to get back down from getting up to that nest.

I liked having it around as long as it was only eating rodents and other pests, but not when it took to climbing the house and getting in the coop.

I would love to hear your comments on this post. Cancel reply