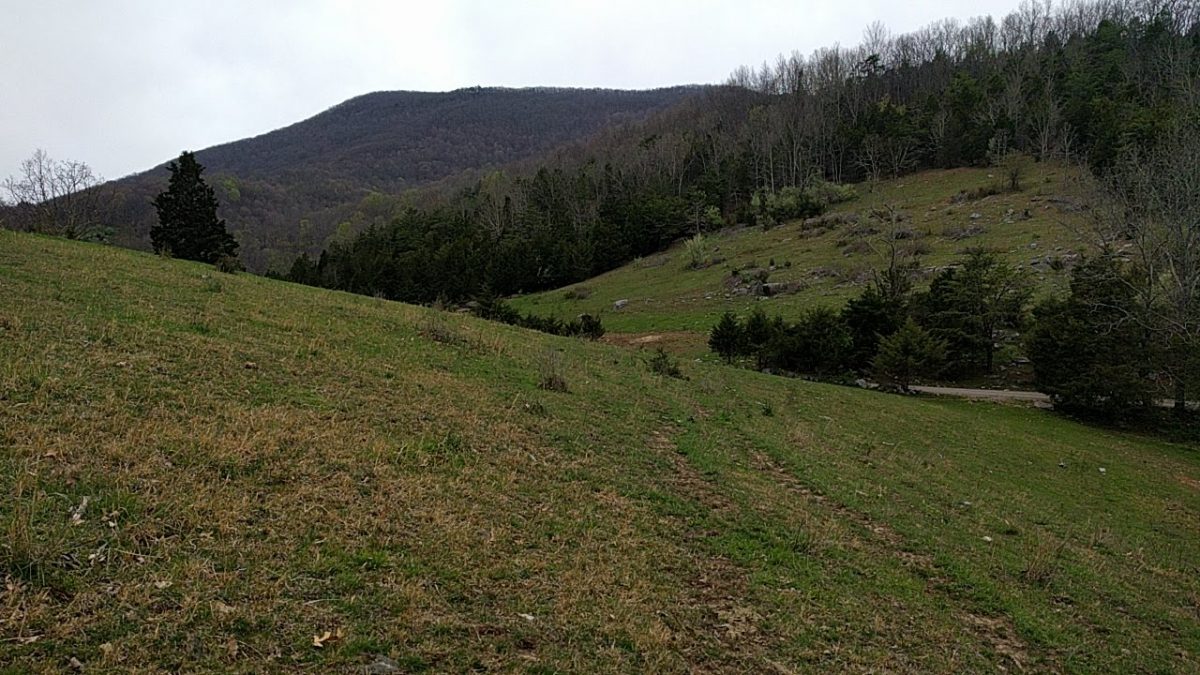 Two of my favorite books, Follow the River by James Alexander Thom and She Walks These Hills by Sharyn McCrumb are based at least loosely on the capture and escape of Mary Draper Ingles. Her capture was only a short few miles from here and after her escape and following the New River back, she was found even closer to here.

Each time I go off into the fields and woods of these mountains, I think of those two books. Today we are awaiting the arrival of more threatening weather, so my walk was right after lunch.

Some firsts, purple violets, buttercups (did you put them under a friend’s chin and tell them whether they liked butter), Virginia Bluebells at the mouth of the cave, Elderberry, wild daisies.

The wind picked up while I was walking and the sky is darkening, though the worst of the weather isn’t due until overnight. Not wanting to deal with a storm warning in the middle of the night and since we can’t go anywhere during the stay at home order, I went ahead and put the cars back in the garage.

It was actually much easier after the clean up of last week. I was able to get out without trouble and walk around them.

A beautiful day requires a walk. As usual, it was along the Huckleberry Trail, a paved retired rail grade. Lots of signs of spring abound.

After the walk, I pulled out the box of saved seed, the new seed, the newly purchased seed starter tray. Grabbed some garden tools and headed to the garden, trying not to be overwhelmed because of the weeds, the wobbly fence, and the deteriorating raised bed boxes. The upper edge of the garden has the compost pile, the asparagus bed, and a 4 by 4′ box. A bit of weeding around the boxes, cleaning up the asparagus bed, and the box. After pulling the spoiled hay off of the box, I planted 4 row feet of spinach seed.

The next row below is a sound 4 x 4′ box that is planted with garlic and perennial onions, some straw needed to be pulled back from the onions, the garlic comes up right through it. Next to that box was a 4 X 8′ box that had not been levelled well when built and was breaking apart. I took the drill and some screws out, dismantled the box, created a spot immediately below the top row box, in line with it with a slightly narrower aisle, laid down newsprint and cardboard in the aisle and bottom of the proposed box. Using the old corners and boards, instead of putting it together in the corner grooves, using screws the boards were fastened to the corner posts to make sturdier though a few inches smaller box. Soil from the dismantled box was shifted to the new box and between that box and the one above it, 24 row feet of dwarf shelling peas were planted. The aisles and beds are full of this.

Fortunately it is fairly easy to pull and it attracts native bees, so it only is pulled from the boxes. It is not going down to freezing tonight and tomorrow is another beautiful day, so I am going to take the rest of the 4 x 8 box and boards and corners from another box to build a fourth box between the one planted today and the garlic. I will try to get more newsprint down under that box and move the rest of the soil. The chicken pen is full of good compost, so I will move a barrow or two over to the garden. If I rebuild the long boxes that are falling apart and level the spots where they will be placed, a little at a time, the garden should be ready for the warm weather planting after Mother’s Day.

Two long boxes are sound, one has the blueberry bushes in it, the other will be cleaned up and compost added to it. One smaller box is the out of control mint bed. If the boards from that box are removed, perhaps I can dig up some of the mints.

Now that dinner has been prepared and eaten, the grow light and warm mat are going to be brought up from storage and the tomatoes, peppers, Chinese Cabbage, and Tomatillos will be sown and started indoors. The cabbages can be planted in about a month, the rest will go in the garden after the last frost date.

Now I need a strong body to help me remove the existing fence, reset the t-posts, remount the fencing in a stronger straighter garden fence. And while that is being done, the chicken pen needs attention too.

We have had so much rain, that the occasional day or two without are such a treat. Today was the second in a row and the last for a while. Yesterday the pretty day was used for outdoor chores. Today, we took a walk. Because of back issues suffered by my love, when we go out together, we keep to smooth surfaces and not too much elevation changes. Between Blackburg and Christiansburg is an old rail grade that has been paved with asphalt, ideal for joggers, bikers, the occasional skateboarder, and lots of walkers, powered conveyance is not allowed. Because of it’s location and access points on and off of it, if you walk near lunch time, you see lots of business folks walking on their lunch break. In some areas, you see houses and parts of Virginia Tech Campus, other parts are in the woods or through the edge of farm fields. I’m not sure how long it is now, as they have extended it in two directions since I moved here. Today, we left from the original start, near the public library branch that for the first 1/2 mile passes between houses, then opens up to agricultural study fields and between a lacrosse and cricket field and the local small plane airport. We walk about 2 to 2 1/2 miles.

This time of year, the spring flowers on the banks behind the houses are beginning to peak through.

There was a bee busy with the crocus. I have wanted a pussy willow since I moved here and have tried to root it unsuccessfully. Maybe I will order one already rooted this year.

Up on our farm, nothing is blooming yet. I don’t even see daffodil shoots, but the iris, day lilies, and Autumn Joy sedum are beginning to emerge. Later, the forsythia, lilacs, and dogwood will bloom, but not for another 6 to 8 weeks. I fear that the warm winter will cause the fruit trees to bloom early and then get hit with a spring frost. I noticed that the garlic and potato onions are up a few inches and they too might get burned back, but if they have established roots from the bulbs, will recover. If the fruit trees bloom early and get hit by frost, we won’t get Asian pears and apples this summer. That will be a disappointment.

I’m glad we got out. Tomorrow will still be in the low 50’s, but rainy. Then we have cooler cloudy days, a couple with sunshine (maybe) but much colder, then back to rain again. When it isn’t rainy, we will add layers and gloves and go on out and walk. It is good for both of us.